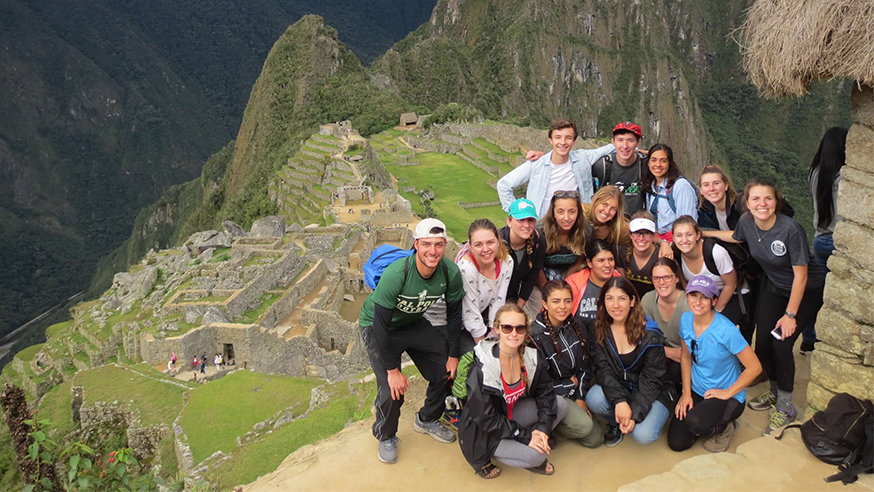 Cal Poly Once Again Ranks Nationally in Study Abroad as Students Continue to Highlight Desire for Learn By Doing in a Global Context.
The university is second best in nation for total numbers of students and is best U.S. master’s level school among students studying abroad on mid-length programs.

“Cal Poly has once again made top rankings, now for the second year in a row, for master’s institutions for the total number of students we sent abroad in 2018-19 and for the number of students sent on mid-length study abroad programs that year,” said Cari Vanderkar, senior international officer and Assistant Vice Provost for International Programs. “While nationally about one in ten of U.S. undergraduates study abroad by the time of graduation according to the Institute for International Education, at Cal Poly about one in four of our undergraduate students in 2018-19 studied abroad during their tenure here.”

The Institute of International Education, the leading not-for-profit educational and cultural exchange organization in the U.S., has conducted the Open Doors Report annual survey since 1919, and with support from the U.S. Department of State’s Bureau of Educational and Cultural Affairs since the early 1970s. Open Doors, which surveys about 2,000 U.S. universities and colleges with Study Abroad programs, released the 2020 figures on Monday, November 16.

Since 2000 Cal Poly has ranked as a top sender in the nation among master’s level universities for internationally bound students.

In the 2018-19 academic year, the most current numbers available, Cal Poly sent 1,216 students abroad to 44 nations, with 556 seniors and 511 juniors studying abroad that year. Participation in study abroad has increased nearly 50 percent over the past five years with the 813 students who participated in the 2013-14 academic year. Over the past fifteen years, Cal Poly has seen participation in Study Abroad programs increase by nearly 116 percent, rising from 563 in the 2003-04 academic year.

In the past two decades, the university also has ranked in the top ten among those who study abroad both for long-term (an academic year) and short-term durations of three months or less. And for mid-length programs, Cal Poly ranks first in the nation two years in a row and in the top eight since 2004-05.

In the latest survey, Cal Poly was the top U.S. master’s university for mid-length (namely semester- or quarter-length) programs with 728 students, a near 78 percent increase over the 2013-14 survey. Last year, the university was also first in the nation with 681 students.

Cal Poly’s vision for internationalization is to provide foundational experiential learning, teaching, service and scholarship opportunities at home and abroad that will best equip graduates and the campus community at large to solve complex global challenges sustainably, ethically and inclusively.

“International education provides rich opportunities for students to enhance their studies and to prepare for work and life in a global society,” said Vanderkar. “In the time of the COVID pandemic we must continue to provide opportunities for students to gain global competencies, either through virtual exchange platforms or through future abroad opportunities. As indicated in our vision statement, Learn by Doing in a global context drives students to critically evaluate themselves, their own cultures, their values and place in the world… It fuels informed global systems thinkers and doers, and activates Cal Poly students to be positive forces in the world.”

About IIE IIE works to build more peaceful and equitable societies by advancing scholarship, building economies and promoting access to opportunity. As a not-for-profit with 18 offices and affiliates worldwide, IIE collaborates with a range of corporate, government and foundation partners across the globe to design and manage scholarship, study abroad, workforce training and leadership development programs.

About the U.S. Department of State Bureau of Educational and Cultural Affairs The Bureau of Educational and Cultural Affairs builds relations between the people of the United States and the people of other countries through academic, cultural, sports, professional and private exchanges, as well as public-private partnerships and mentoring programs. These exchange programs improve foreign relations and strengthen U.S. national security, support U.S. international leadership, and provide a broad range of domestic benefits by helping break down barriers that often divide us. ECA sponsors the flagship Fulbright Program, the Benjamin A. Gilman Scholarships for U.S. undergraduates with financial need, the Critical Language Scholarship Program in support of U.S. foreign language study abroad, and the EducationUSA network of more than 400 advising centers worldwide.